Last week I completed and uploaded to the AIC’s You Tube and Podbean channels all the remaining episodes in The Lives of the Saints – Second Series.   All thirty-one episodes are now linked from the Digital Library (for the videos) and the Podcast Archive (for the podcasts) pages at www.anglicaninternetchurch.net.   I’ve made several changes to the appearance and organization of the site, hopefully making it easier to find the electronic and print resources visitors are looking for.

Getting the project to completion allows me to focus the rest of A.D. 2017 and most of A.D. 2018 on our The War on Christianity series of videos and podcast; on updating several episodes from the New Testament Bible Study videos of a few years ago; and developing a marketing plan for the AIC Bookstore Publications. 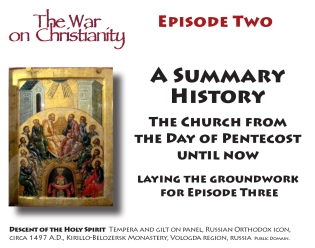 The War on Christianity series has been reorganized, with the addition of at least two and  possible three new episodes that will provide a better bridge between Episode One, which examined the nature of the threat using actual examples of violence from around the world in A.D. 2016 and 2017, and the teaching episodes intended to offer self-defense through knowledge of Church doctrine and through the actual application of traditional teachings.

The slides and script for Episode Two are almost complete.  In them, I put the on-going “War on Christianity” into the historical perspective of the spread of the Church Universal from the day of Pentecost up until now, emphasizing the meaning of the Nicene Creed’s statement that the Church is “one Catholic and Apostolic.”  I pay tribute to the original Apostles named in Scripture and to the second, third and fourth (and later) generations of Bishops, Priests, Deacons, scholars, and theologians who, many times forfeiting their lives in the process, organized and spread the Christian Faith from the Holy Land literally across the world.  As always, the slides are illustrated with icons, frescoes, mosaics, paintings and photographs intended to enrich the viewing experience.  The episode ends with a series of slides on the membership and region-by-region and, sometimes, country-by-country distribution of its membership.  I suspect the data will surprise many.

As always, I thank you for your interest in and support for the online ministry of The Anglican Internet Church.  May the Lord bless you in all that you do in His Name.

Glory be to God for all things!  Amen!

After thirteen months of research, including the often-frustrating search for suitable illustrations, I have come to the end of The Lives of the Saints – Second Series.  Earlier this week I uploaded the final three episodes to You Tube and this morning approved their release to the public and uploaded the podcast versions to our PodBean channel.  Purchase of images used here and in the AIC Bookstore publications is made possible by donations and from royalties generated by sale of our twelve books.

Episode Twenty-nine celebrates St. Leo the Great, the first Roman Catholic pope of the many who took the name Leo to be called “Great.”  He presided at Rome from 440 A.D., when he was elected by acclamation. until his death in 460 A.D.  A very strong supporter of the decisions of the Councils of Nicea and Constantinople (First meeting), he regarded the doctrinal rulings of the Councils as having equality with Scripture, since they were based upon Scripture.  He did not attend, but did write a letter which was read at Chalcedon supporting the dual nature of Christ decision of that Ecumenical Council. His remains are enshrined in an altar inside St. Peter’s Basilica, Rome.

Episode Thirty celebrates St. Clement of Rome, claimed by the Roman Catholic Church as the second Pope.  Other accounts place two, and in some cases, three, men between St. Peter and St. Clement.  St. Clement enjoys the distinction of having had his Epistle to the Corinthians (late 1st C.) considered in the first five centuries of the Church Universal as canonical, that is, equivalent to Scripture.  I quote from the his epistle several times in hopes to helping bring his work to the attention of modern listeners and readers, most of whom have never heard of Clement of Rome (or Clement I).  He presided at Rome from about 88 A.D. to around 99 A.D., when he died a martyr’s death on the Black Sea near southern tip of present-day Crimea.  The episode includes a 6th C. image of St. Clement which I extracted from a much larger frieze at the Basilica of St. Apollinare at Ravenna, Italy, one of the finest surviving examples of Byzantine art and architecture in the Western Church.  St. Clement is the Patron Saint of mariners and is often depicted with an anchor.

Episode Thirty-one, the last episode in the Second Series, celebrates St. Catherine of Alexandria, formerly a favorite saint but in the last 300 or so years relegated to near fictional status.  Among the saints of the early 2nd millennium, largely as the result of the Crusades in the Holy Land and the Western discovery of her story, she was widely popular.  Her name endures today in various colleges, islands, and mountain ranges named in her honor.  A strong tradition in the Eastern Church is that her remains are interred at the Monastery of St. Catherine, Sinai, built in the 6th C. under orders by, and sponsorship of, Emperor Justinian.   There are many schools named after her, including St. Catherine’s here in Richmond, Va.  She is the Patron Saint of Virgins and all young women.  She met her death by beheading around 305 A.D.   The illustration is a detail in tempera and gilt on velum of the death of St. Catherine which I extracted from a larger work from the Menologion of Basil II, a form of service book with a Synaxarion of over 400 martyrs prepared for the incumbent Archbishop of Constantinople in the late 10th C.  The original is in the Vatican Library.  The illustration and the larger work from which it was extracted are included in the video.

Now that The Lives of the Saints series is over, I turn my attention to The War on Christianity series of videos and podcasts.  I have reformatted the series to include at least two transition episodes between the opening video and the more teaching-oriented episodes which will follow.  The new material offers a summary history of the Church from the Day of Pentecost to Now, with data on Church enrollment around the world (Episode Two) and a separate episode (Episode Three) on three parts of the world where the Christian Faith was once the predominant religion: the Holy Land; Asia Minor; North Africa.

As regular viewers of this Blog and the AIC Web Site will have noticed, I have introduced a number of changes at the Web Site.  These are intended to improve the ease of use of the site’s unique video, print and podcast resources.   The changes include

As always, I thank viewers for their interest in the site and encourage them to click the “Follow Anglican Internet Church” link, which will give notice of all new postings on Fr. Ron’s Blog.

Glory be to God for all things!  Amen!

I’ve gotten ahead on the production schedule and have now uploaded Episode Twenty-eight in The Lives of the Saints – Second Series, which honors the English Martyrs who were burned at the stake.  They are also widely known as The Oxford Martyrs, owing to the plain fact that they were tried, convicted and executed at Oxford in 1555 A.D. (Latimer and Ridley, with Cranmer forced to watch) and 1556 A.D.(Cranmer’s death).

The illustration is a recent professional-quality photograph by Jeremy West of the Martyrs Memorial at the intersection of St. Giles, Magdalen and Beaumont near Balliol College.  The monument was designed by George Gilbert Scott and was completed in 1843 A.D.  The steady deterioration of the monument was brought to an end by a refurbishing in 2003 A.D.

The episode features a short introduction placing the events in the historical context of the history of the Church of England from the 1620s through the accession of Elizabeth, with one picture each of Henry VIII, Edward VI, Mary I and Elizabeth I.  After that is a brief biography of Hugh Latimer, Nicholas Ridley, and Thomas Cranmer.  The very popular work, commonly called John Foxe’s Book of Martyrs but officially titled Acts and Monuments, is the source for many of the illustrations of the trial and executions.  I’ve left the gruesome details out of this Blog entry, instead posting the attached colorized illustration by Joseph Martin Kronheim of Plate V, Latimer Before the Council, taken from an 1887 A.D. edition of Foxe’s famous work

Listen to the Podcast

The three remaining episodes are finished and ready to upload to YouTube prior to the Feasts of Leo the Great (Nov. 10), Clement of Rome (Nov. 23) and Catherine of Alexandria (Nov. 29).

As always, thank you for your interest in the Internet ministry of the Anglican Internet Church.  May the Lord bless you in all that you do in His Name. Amen.