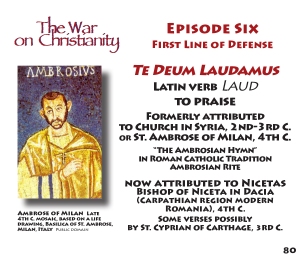 The long-delayed Episode Six in the AIC Christian Education video series The War on Christianity is now online in both video and podcast versions.   Subtitled “The First Line of Defense,” the episode is focused on Part One of the Te Deum Laudamus canticle (from the opening sentence to “also the Holy Ghost, the Comforter”).  The episode includes a summary of the canticle’s history and a verse-by-verse commentary on its meaning and Scriptural warrant, with illustrations from the 6th through the 21st C.  This powerful and inspiring Canticle is the first suggested Canticle (or “Hymn” in the rubric in page 10) following the First Lesson in Morning Prayer.

The Te Deum Laudamus, so named after its first words in Latin, meaning We praise Thee, O God, is among the very best summaries of the most essential doctrines of Christianity — everything from angels, cherubim and seraphim; martyrs and apostles; to the Holy Spirit.   The slides include an annotated version of the text with emphasis and pause indicators.  To save time in the presentation, the text is read rather than chanted.   This episode is the first of several on the concept of understanding the teachings of the Church as the best “first line of defense” for individual Christians in the secular world’s on-going War on Christianity.

Episode Seven, focused on Parts Two and Three, will be uploaded later in February or in the first full week of March.

May God bless you in all that you do in His Name.  Glory be to God for all tings! Amen! 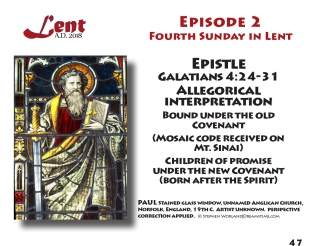 Episode Two in the AIC Seasonal Video series, Lent A.D. 2018, is now available on our YouTube channel.  The subjects of Episode Two are other commemorations of Lent (Lenten meals, prayers and music) and the Collects, Epistle and Gospel readings, and suggested seasonal music, for First Sunday in Lent through and including the Fourth Sunday in Lent.  I’ve found some additional illustrations, including a stained glass window of St. Paul in East Anglia, England (above, left), to which I applied perspective correction.   I used this one because, since all four epistle readings are from the writings of St. Paul, I was running out of images not previously used (either in Episode One or in other AIC Video series).  Also in the episode is a Russian Orthodox icon of St. Paul in flowing robes from the 18th C., from the iconostasis at the Church of the Transfiguration, Kizhi Monastery, Karelia, Russia.  The music suggestions come from the AIC Bookstore publication, The St. Chrysostom Hymnal, which include hymns either not in the 1940 Hymnal or which are in it but set to different tunes.

Watch the Video.    Listen to the Podcast Version of Episode Two

I am already working on Episode Three, which will be the final episode in the series.  It will be focused on Passiontide, including the Fifth Sunday in Lent (Passion Sunday), Sixth Sunday in Lent (Palm Sunday) and Maundy Thursday (Holy Thursday).  The episode, due for release before Passion Sunday, will include many illustrations not commonly seen in the Western Church, including mosaics, frescoes and icons.   The multi-part AIC service for Good Friday, In the Cross of Christ I Glory, is already available in Podcast version and in written form in another AIC Bookstore publication, Occasional Services for Anglican Worship (pp. 75-101).  The eight podcasts are linked from the Podcast Homilies page.  The book is linked from the Virtual Bookstore tab at the bottom on the home page.

The next AIC Seasonal Video series is Easter: From Easter to Ascension, for which I have developed a special graphic featuring a 16th C. icon of the Resurrection.

As always, thank you for your interest in and support of this Internet ministry.  Just a reminder, 100% of all book royalties are donated to the AIC and no one associated with the AIC receives any form of compensation.  Please consider subscribing to the Blog by clicking “Follow Anglican Internet Church” in the right hand column.  You’ll receive notice of each new posting.

If you have not already done so, I urge readers to attend an Ash Wednesday service today and receive the Imposition of Ashes.

May God bless you in all that you do in His Name.  Glory be to God for all things!  Amen.

The first episode in the newest AIC Seasonal Video series, Lent A.D. 2018, is now available in both video and podcast version.  The series will include three episode.  Episode One is focused on the origin and meaning of the Feast of Lent and an examination of the two services for Ash Wednesday in the 1928 Book of Common Prayer.  In Episode Two I will discuss the Collect, Episode and Gospel readings, and appropriate music for the first four Sundays in Lent.  In Episode Three, the focus will be on the final two Sundays plus a discussion of Maundy Thursday.

Episode One is illustrated with mosaics, stained glass windows and paintings from the artistic traditions of both the Western and Eastern Church.   The series on Lent will be followed later this year by separate series in the same format on Easter (up to Ascension Day) and Trinity.  When all the episodes are complete, there will be, with a lone exception, Seasonal Videos on the Digital Library page of this site on the entire Church Calendar from Advent through Trinity.  The presentation for Good Friday is available only in Podcast form on the Podcast Homilies page under the title In the Cross of Christ I Glory, offered in eight segments of about 12-15 minutes each.

As always, thank you for your interest in and support for this Internet-based ministry aimed at helping the average lay person have access, 24/7, to theologically-sound materials in video, podcast, paperback (or Kindle) formats.  Given the secular world’s continuing assault on Christianity, these resources are needed more than ever.  My message to readers and viewers is that you are not alone.  You stand with millions of the faithful around the world.

May God bless you in all that you do in His Name!  Amen.  Glory be to God for all things! Amen!