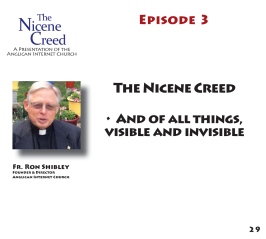 This morning I uploaded Episode Three in the video series, The Nicene Creed.  In this episode the topic is the final statement concerning the Father (continued from Episode Two): “And of all things, visible and invisible.”  The episode running time is just over 24 minutes.

The phrase “visible and invisible” so often puzzles the modern mind.  I spend time in the episode explaining its meaning in words and with 10 illustrations, including paintings, frescoes, etchings and icons from the 6th, 11th, 14th, 15th and 19th centuries by artists ranging from anonymous icon and fresco painters to Rembrandt and Russian illustrator Vasily Surikov.  It is very hard for people educated in the “reason” culture of the Western Church to grasp the spiritual concept that there are “invisible” things in God’s universe.    Changing the words to “seen and unseen” won’t do.   “Unseen” misses the point.   As I point out in Episode Three, that which is meant by St. Paul in Colossians 1:16 and by the the Nicene Creed’s “invisible” cannot be “seen” no matter how hard you try.

One of the illustrations is a recently-discovered fresco of an angel at the Church of the Nativity, Bethlehem, currently undergoing a long-deferred renovation.  A Google search will using the name of the Church will produce an Associated Press picture of the angel which had been hidden behind plaster for many years.  Another illustration of the invisible is Surikov’s bleak, late 19thth C. depiction in oil on canvas of the temptation of Christ by Satan.

Watch the video   or     Listen to the Podcast

Next, in Episode Four, which will be available next week, I offer the first of two episodes on what the Nicene Creed has to say about the Lord Jesus Christ, beginning with “in one Lord Jesus Christ” through “Being of one substance with the Father.”  Episode Five, expected to  be available in early August, follows up with discussion of “By whom all things were made” through “whose kingdom shall have no end.”  Episode Six, the final episode in the series, will focus on the last paragraph of the Creed.

As always, thanks for your interest and support.  May God bless you in all that you do in His Name.  Glory be to God for all things!  Amen!