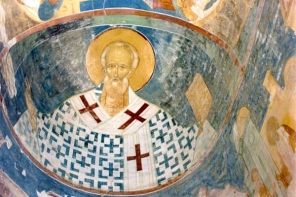 This week I have uploaded two new episodes in The Lives of the Saints – Second Series.   Both series are linked from the Digital Library page at the AIC’s newly-redesigned Web Site.  (use the link at the bottom of the page).  The music for the series was created for us by Richard Irwin at hymnswithoutwords.com.

Episode 3 celebrates the life of the real man who inspired the modern Santa Claus, Nicholas of Myra, whose Feast Day is December 6th.  In the episode I explain how and when the legend of Nicholas of Myra migrated from present day Turkey to Italy, then Germany and finally to England, Ireland and the United States.   The illustration is a 16th C. fresco at Ferapontov Monastery, northern Russia, possibly by the celebrated artist Dionysius, whose spiritually-minded style strongly influenced the greatest icon painter in Russia, Andrei Rublev.     Watch Episode 3                  Listen to Episode 3

Episode 4 celebrates one of the most under-appreciated saints in the Western Church’s list of saints:  Ambrose of Milan, whose Feast Day is Dec. 7th.  St. Ambrose was one of the most spiritually-minded of the early leaders of the Church in the West.  He was also a gifted writer of hymns.  The newly-published St. Chrysostom Hymnal includes ten hymns attributed to him, including my personal favorite, Come, Holy Ghost, Who Ever One, which I read in the video with the tune Lasst uns erfreuen, best known for its use with All Creatures of Our God and King, in the background.  The illustration is an 11th C. mosaic of Ambrose at the Capella Palatina, or royal palace chapel of the Norman kings of Sicily, Palermo, Sicily.   I revere Ambrose for many other reasons, primarily because, of the saints recognized in the Western Church, he was the last whose theology was not significantly different from that of his contemporary bishops in Constantinople, Antioch, Jerusalem and Alexandria, the other great Sees of the early Church.  He is best known to most Western Christians as the mentor of St. Augustine of Hippo, whose fame far eclipsed that of Ambrose in later years.

My proofreader assures me that he will finish with The 1928 Book of Common Prayer – Service Book Edition later this week or early next week.  As soon as I can incorporate any changes or corrections, I will make the book available via both our Virtual Bookstores:  with CreateSpace and with Amazon.com.  Both sites will be linked from the Virtual Bookstore section at the bottom of the home page at the AIC Web Site (www.AnglicanInternetChurch.net).  I’ve asked him to proofread the Revised Edition of The Prayer Book Psalter, which I hope to make available early in January 2017 A.D.   I have continued to work on the design for the new cover for the Revised Edition, which will make the design compatible with most of our other bookstore publications.

n The Writing Prophets of the Old Testament, a companion book to a new series of Bible Study videos on the Major and Minor Prophets which will start appearing via our YouTube channel around the middle of February 2017 A.D.  The graphic offers a glimpse of the revised version of the proposed cover.   The images on the cover are, from left to right, an 11th C. mosaic of Isaiah at Neo-Moni Monastery, Chios, Greece; 18th C. icons of Jeremiah and Ezekiel at the summer chapel, Kizhi Monastery, Karelia, Russia; and a 19th C. fresco of Daniel at the Basilica of St. Paul Outside the Walls, Rome, Italy.  I have completed the text and pictures for Isaiah, Jeremiah and Ezekiel, am working on the Daniel section, and have roughed out the design, text and illustrations for the twelve Minor Prophets.  There will be about 50-60 illustrations from the 11th through the 20th Century.

As always, thank you for your interest in and support for this Internet-based ministry.  May God bless you in all that you do in His Name during this Advent season and the coming Nativity feast.