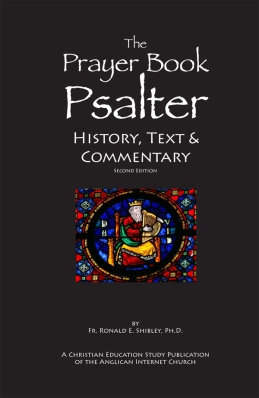 The first two episodes in The Lives of the Saints – Second Series have been uploaded to our YouTube channel, with Podcast versions also available.   St. Clement of Alexandria and St. John of Damascus are both celebrated on December 4th.   Once again, the theme music was provided by Richard Irwin at http://www.hymnswithoutwords.com.

During the week of December 5th, I will release the two remaining December installments in the same series, honoring St. Nicholas of Myra and St. Ambrose of Milan.

In other news, I’ve almost completed a major upgrade of The Prayer Book Psalter: History, Text and Commentary.  The book will have a new cover that looks more like the covers of our other publications, a revised interior design, a revised Commentary section for each Psalm, with built-in cross references to other AIC Bookstore publications with similar or related content.   The front cover illustration is a stained glass window at the Collegiate Church of Notre Dame, Dinant, Belgium.  Image copyright Jorisvo/Dreamstime.com.   The back cover (not shown) includes a stained glass window based on Psalm 23 at Green-Wood Cemetery Chapel, Brooklyn, NY, dating to about 1911 A.D.

Other books undergoing editing for revised editions is Christian Spirituality: An Anglican Perspective, which is getting a revised Part Five that reflects the dramatic changes made to the AIC Web Site in September.  There are a couple of minor changes but the page count and the cover remain the same.

Thanks so much for your continued support and interest.  I’m getting a significant increase in friend requests on Facebook, probably as a result of our ad campaign on Amazon.com.