My wife and I have just returned from a week’s vacation on Hatteras Island, so I thought to catch up with the various AIC web presences, including reading all the many email messages. 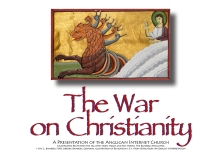 One viewer raised a question concerning the current episode, Episode Five, in AIC’s Christian Education video series, The War on Christianity.   The question indicates the need for a clarification for those who my have not seen Episode One through Episode Four.   For those who have just joined in watching series, let me repeat some of the points I made in that first episode.

First, there is a vigorous War on Christianity that is literally going on each and every day all around the world.  In Episode One I included data about how many physical assaults there have been and highlighted five such events in 2016 and 2017 A.D.

Second, the ultimate objective of those leading, and/or encouraging, the War on Christianity is to eliminate Christianity from the public and private sphere.   The War on Christianity has nothing to do with fairness doctrines or equal treatment of all religions or cultural prejudices.   It is a fight for the survival of Christian belief, although many modern Christians are in a state of denial.  The objective is, just as it was for those who successfully suppressed the Church in the 2nd through the 15th C, is to make Christianity irrelevant in public, and, in my opinion, in private worship.

Third, the five incidents are a warning sign that, in spite of those who deny reality, the loss of majority status “can’t happen here,” such a loss has happened before and is happening now right before our eyes.

Self-imposed Limitations on the Format:  Because AIC video series usually are presented in episodes of under 25 minutes. I cannot summarize in each episode all that has been said in previous episodes.  The first effort to produce such a summary caused the initial version of Episode Two, the Summary History of the Church from Pentecost Until Now, to run about 34 minutes.  I retreated and instead presented the subject matter in two episodes.   The same problem reappeared in the first version of Episode Four, which ran even longer, with all three case studies of regional declines in a single episode.  As with the previous example, I retreated and rewrote the material into two episodes, with important events in the Holy Land and North Africa treated in one episode, leaving Asia Minor to be treated in its own separate episode.

I made many of the same points that I made in Episode One in Episode Five, but perhaps I did not make the following point strongly enough in the section on Lessons Learned.  Let me make it clearer now:  many of the players in the decline of Christianity in the Holy Land, North Africa, and Asia Minor still exist today.  They are Islamic fundamentalism plus international and Church politics. Additionally, in place of the greedy merchants of the Republic of Venice in the 13th through 15th C., whose objective was to destroy the Byzantine Empire and reap the benefits for themselves, are the international corporations and rich individuals with limitless wallets and atheistic values.

In future episodes I will offer ideas and practices which I think will make any Christian more able to defend the Christian Faith.  In Episode Six, subtitled The First Line of Defense, I will discuss how important it is for any Christian to understand traditional Christian doctrine.  Currently, I anticipate a total of 12 to 15 episodes.

All episodes of The War on Christianity series are linked from the Digital Library page (for the videos) and the Podcast Archive page (for the MP3 podcast versions.  Use the appropriate tabs above and below to reach these pages.

Sunday Next Before Advent:  On another topic of current interest:  If you attended Church today and did not hear a homily/sermon on what the concept of “stir-up” means, where it came from, and how important it is to the coming Advent celebration, you can listen to a my Homily for Sunday Next Before Advent on the Podcast Homilies page of this site.

As always, thank you for your interest and support.  You can help make our material more widely available by subscribing to this Blog or to our YouTube or Podbean pages.

May God bless you in all that you do in His Name!  Glory be to God for all things!  Amen!