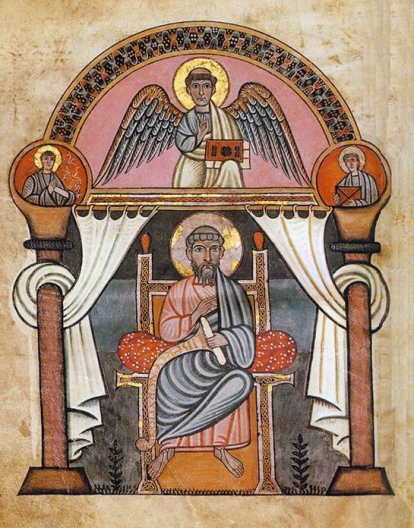 Episode Two in the revised edition of the AIC Bible Study Video series, The New Testament:Gospels, is now available in both video and podcast formats.  The episode, an introduction to the Gospel of St. Matthew beginning with its history and the genealogy of Jesus, includes four images of St. Matthew not often seen by the general public. The best of these, at left, is an illumination of St. Matthew from the Codex Aureus of Canterbury, made around 750 A.D. in England in the region of Canterbury.   The Codex Aureus (Golden Gospel) was stolen by Viking raiders in the 9th C. and bought back through a monetary ransom payment later the same century.  Where it resided between then and its movement to Spain in the early 16th C. is unclear.  Two centuries later, in 1690 A.D. it was bought by the King of Sweden and since then has resided at the Konigliga Bibliotek (Royal Library), Stockholm, Sweden. The Codex is also known as the Codex Aureus of Stockholm.  The image is from the Yorck Project’s CD collection, 10,000 Masterworks through Wikipedia Commons.  I adjusted the image using perspective and other correction methods in Photoshop.

The second ancient image is equally magnificent, a page from a Gospel book produced by the Ottonian dynasty of Holy Roman Emperors in the late 9th or early 10th C. from Cotton Ms Tiberius A II, in the collection of the British Library, London, England.   The third, circa 950 A.D., also comes the Ottonian period, from the collection of the New York Public Library.    The fourth is closely-related to the start of the reign of Charlesmagne, the first emperor of the revived Holy Roman Empire in Europe, crowned by the sitting Pope in 800 A.D.  The source is the Harley Golden Gospel, made in Aachen, Germany, around 800 A.D. from Ms. Harley 2788, also in the British Library, London.  Most of us in the Western Church do not give enough credit to Charlesmagne’s commitment to the spread of Christianity into the Germanic territories.  His sponsorship resulted in the creation of some of the finest religious art in the Western Church.

Episode Three, focused on more of the genealogy of Jesus and St. Matthew’s theme of the life of Jesus as fulfillment of Old Testament prophecy,  will be released next week.  The episode features more remarkable images of St. Matthew and other religious art.

As always, may God bless you in all that you do in His Name!  Glory be to God for all things! Amen!