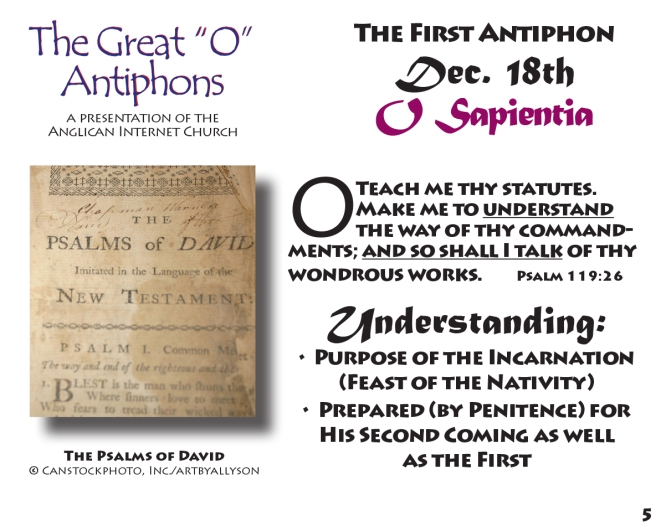 Today, December 18th, is the first of the final seven days of Advent.  The AIC Seasonal Video series, The Great “O” Antiphons, offers Scripture, commentary, the reading/responses of antiphons and music for the occasion.  The series is based on a 12th C. office in the Roman Catholic tradition.  Here you will find information and links each day until the final episode on Dec. 24th.  The text for the entire series is printed on pages 21-27 in the AIC Bookstore Publication, Occasional Services for Anglican Worship, available using the Virtual Bookstore link at the bottom of the Home page.  The entire series is linked from the Digital Library page with Podcast versions from the Podcast Archive page.

The theme music for the day is On Jordan’s Bank the Baptists’ Cry, performed on his church organ by Jared Haselbarth, from his DVD (available at http://www.NABA.com).   The key phrase is O Sapientia, meaning Wisdom.  In Christian theology, Jesus Christ is the embodiment of the wisdom of the Father.

Listen to the Podcast version of O Sapientia.

Once again this week I have “doubled up” and uploaded two new episodes in the revised and extended version of our Bible Study Video series, New Testament: Gospels.  In Episode Twenty-four and Episode Twenty-five I complete my discussion of the Gospel of St. Luke.  Both episodes are focused on Unique Content in the Gospel of St. Luke.  Episode Twenty-four is focused on the Kingdom Lectures and the Restoration of Zaccheus.  Episode Twenty-five is focused on three topics, Jesus Before Herod, the Prayer Habits of Jesus, and the important roles for women in St. Luke’s Gospel.   The featured image is a 10th C. A.D. Byzantine illumination in tempera and gold on parchment made at Constantinople, showing St. Luke seated in an upholstered chair with a platform for his feet and in front of a large desk writing his Gospel.  The desk is filled with quills and what looks like a paper knife.  There are scrolls and a inkpot at his feet.  This version does not include the traditional image of an ox, the symbol of Luke.  The original is from Ms. Additional 28815, Folio 76v, British Library, London, England.  The British Library has not yet digitized much of the Additional Ms collection, including No. 28815.  This version is sourced from the Yorck Project, a DVD published in 2002 A.D. as 10,000 Masterworks of Painting.  The entire set of more than 10,000 images can be viewed on line.

I have recorded the first two of twenty revised and extended versions focused on the Gospel of St. John, these being episodes twenty-six to forty-five.  Episode Twenty-six and Episode Twenty-seven will be released during the week of October 20th. Episode Twenty-five is focused on a general introduction to the Gospel of St. John and a reading of St. John’s unique Prelude in verses 1-5.  Episode Twenty-seven begins with a discussion of John 1:1-5 and moves on to reading and discussion of John 1:5-18.  Later today I will record the next two episodes which will be released during the week of October 27th.   The slides and script for all remaining episodes have been completed but lack sound tracks and picture-to-sound correlation in iMovie.  The final slide in the series, in Episode Forty-five, will be No. 1560 (vs. No. 885 in the original series).  It has been a great and enjoyable adventure finding and editing the great Christian tradition of spiritually-minded images (vs. the modern representational forms in which the meaning often gets lost in the details and backgrounds).  I hope and pray that viewers find them spiritually enriching and helpful in understanding Scripture.

I have started work on a new series of Podcast Homilies based upon the appointed readings from Psalms and Lessons for Morning Prayer in the 1928 Book of Common Prayer, using the alternative which includes a Gospel reading for the Second Lesson.  These will be linked from the Podcast Homilies page and posted in the order of the Church Calendar beginning with First Sunday in Advent.  I hope to have the four Advent podcasts complete before the start of the new Church Year 2019-2020 on December 1st.

As always, thank you for your interest and support.  May God continue to bless you in all that you do in His Name! Amen!  Glory be to God for all things! Amen!

Episode Twenty-two and Episode Twenty-three in the revised and expanded version of the AIC Bible Study Video series, New Testament: Gospels, were uploaded to the AIC’s YouTube channel and Podbean channel this morning.

In order to finish the revisions in the series before year end, I decided to “double up” and complete two each week.  Both of this week’s premiers are about Unique Content in the Gospel of St. Luke, with Episode Twenty-two on Jesus’ discourses on Spiritual Light and the Hypocrisy of the Pharisees and Episode Twenty-three on His moral discourses.  The featured illustration is from the latter episode (in the context of “O You of little faith” Luke 12:28b).

The two remaining episodes on the Gospel of St. Luke will be completed and uploaded during the week of October 14th.

The first two episodes on the Gospel of St. John (Episodes Twenty-six and Twenty-seven) are nearly complete and, barring any technical glitches, should be available for upload during the week of October 21st.  I have completed the revisions of all the remaining slides and scripts in the series and hope to release two episodes per week with a goal of getting the whole series uploaded before Christmas.

As always, thank you for your interest and support.  May God bless you in all that you do in His Name!  Amen.  Glory be to God for all things! Amen! 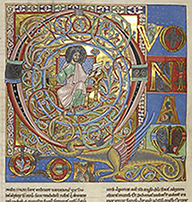 I’m pleased to announce the uploading for another revised episode, Episode Twenty-one in the AIC Bible Study Video series, The New Testament: Gospels.  Content is Part 2 of 6 in Unique Content in the Gospel of St. Luke, including Sending the Return of the Seventy and Jesus’ encounter with Mary and Martha at Bethany.

This week’s featured illustration is a miniature illumination in gold and colored inks on parchment of St. Luke writing his Gospel from the Arnstein Bible, produced at Arnstein, Germany around 1172 A.D. from Ms. Harley 2799, Folio 173bv, British Library, London, England.  The image has to be shown quite small because the original image is also very small.  Any larger and the image would break up and the sheen on the gold would be reduced.  It was originally housed at the Monastery of St. Mary and St. Nicholas and was sold to Edward Harley in 1720/21.  The scribe’s name was Lunandus, a monk at the monastery.

Watch the video.        Listen to the Podcast version.

This uplink brings me very close to completing the rebuild of the episodes on St. Luke’s Gospel.  I have recorded and edited Episode Twenty-two and expect to upload it plus Episode Twenty-three during the week of October 7th, with the final two episodes coming the week of October 14th.  All the slides and text for all the episodes (26 to 45) on the Gospel of St. John are complete, but no episodes have yet been recorded.   These final episodes include many more examples of Church art that are rarely seen in public, including a Gospel book written in Germany between 778 and 820 A.D. at the start of the Carolingian era that began with the coronation at Rome of Charlemagne as Holy Roman Emperor in 800 A.D.

As always, thank you for your interest and support.  Please consider subscribing by clicking the Follow Anglican Internet Church legend in the righthand column.  You will receive a link to each new posting.

After a short delay in production, Episode Nineteen in the revised editions of our Bible Study Video series, New Tesament: Gospels, is now online.  It runs just over 21 minutes, with a superb and very vivid early 11th C. illumination on the Parable of the Rich Man and Lazarus presented in 3 tiers.  The featured illustration, since I have used the Rich Man and Lazarus illumination in previous years, is a 16th C. restoration of much older fresco from Bulgaria.

I’ve been very busy completing the updating of the final episoses of the Gospel of  St. John.  Episode Forty-five should be complete by the end of the week or early next week.  It includes several illuminations I had not seen previously.

As always, thanks for your interest and support.  May God bless you in all that you do in His Name! Amen!   Glory be to God for all things! Amen!

Episode Six, the final episode focused on the Gospel of St. Matthew, in the AIC Bible Study Video series, New Testament: Gospels, is now online in video and podcast versions.  This completes the rebuild of the St. Matthew portion of the Bible Study Videos, making them consistent with current videos in all series and also adding many examples of historic Church art from many sources.  Episode Six includes selected examples of unique content and quotations, including the long form of the Lord’s Prayer and the Beatitudes, plus the “kingdom” parables, and, as shown in the illustration, the curious miracle of the coin in the fish at Capernaum (Matt. 17:24-29).

Watch the Video       Listen to the Podcast

In the next episode, Episode Seven, I focus on the Gospel of St. Mark with an introduction to its history, authorship, time frame, language, intended audience and style, plus the beginning of my discussion of St. Mark’s themes, starting the Jesus as Servant of the Father.

As always, thank you for your interest and support, which enables the production of these videos free-of-charge, on-demand, through links from this Web Site.

May God bless you in all that you do in his name! Amen.  Glory be to God for all things! Amen.

I have now finished Phase I of the rebuilding of the Podcast Homilies page I announced in October.  Viewers and listeners will now find new links to freshly-recorded versions of my four theme-word or theme-phrase homilies for the Four Sundays in Advent; plus new Podcast Homilies for Christmas Day, First Sunday after Christmas Day, and Second Sunday after Christmas Day; and revised homilies for Epiphany (Day) and all six Sundays after Epiphany.  Within each homily are internal cross-references to Other AIC Resources on the same words, readings, topics or phrases.

These Other AIC Resources include:

Phase 2 in the rebuild, to be completed in January A.D. 2019, will include revised Podcast Homilies, with internal cross-references, for Gesima (Pre-Lent); Lent; and Easter.   The texts for all three seasons have been written and need only a final review before recording.  Texts for Good Friday remain unchanged, since they were revised in Spring A.D. 2018.   Phase 3, to be completed in February A.D. 2019, will include Podcast Homilies for Whitsunday/Pentecost, Trinity Sunday and the Sundays after Trinity.   The texts for Trinity season are only in the early stage of editing.   Both Phase 2 and Phase 3 will be work to be accomplished in the cold, dark and wet days of Winter in Virginia, when working on the yard, garden and house cannot be comfortably accomplished.

Please consider becoming a Follower of this blog by clicking the “Follow Anglican Internet Church” tab in upper area of the right-hand column.  You’ll be asked to enter your email address in order to receive notice from our vendor, WordPress.com, of all new postings.   Be assured that the AIC does not share such information with any other organization or with any vendor.

As always, thank you for your interest in and support of this unique Internet-based ministry.  May God continue to bless you in all that you do in His Name!  Amen!   Glory be to God for all things! Amen!